Critically, the Analogue to Digital Converter (ADC) had an overflow point, and overflow of the ADC creates serious IMD and major degradation of received signal, overflow has to be prevented at all cost. To limit the power delivered to the ADC, a narrow ‘roofing’ filter usually preceded it, and the channel filter was digitally synthesised.

Being digitally derived, the AGC could have near zero attack time, which meant that it desensitised the receiver on impulse noise that might be of such character as to not be a problem if it was ignored as in early generation receivers. Receivers that suffered this problem (eg IC-7000) were just poor designs, not a failure of the concept of AGC. In the IC-7000, a circumvention is to run the Noise Blanker whenever there is impulse noise present, it effectively removes the impulses for AGC detection in that case.

Lets look at the Delayed AGC response of the TS2000 with preamp off on 7MHz, noise floor is -126dBm in the receiver being measured (Duffy 2012). 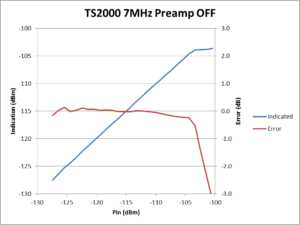 Linearity of PowerOut/PowerIn is very good up to -104dBm, above which the PowerOut is levelled quite effectively.

So, the Delayed AGC system allows the output signal to grow proportionately to input signal building better S/N ratio until the AGC threshold at -104dBm is reached and S/N has built to 22dB.

If you manually reduce RF gain for signals below the AGC threshold, you increase receiver Noise Figure and decrease S/N ratio.

It is often held that disabling AGC improves ‘sensitivity’.

Lets again use the TS2000 as an example of this type of receiver, and explore linearity of PowerOut/PowerIn with AGC disabled. 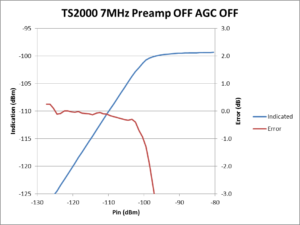 Linearity of PowerOut/PowerIn is very good up to -104dBm, above which the PowerOut no longer increases proportionately to input, and is effectively levelled at about -99dBm, levelled by overflow of the ADC at just 5dB above the AGC threshold determined above.

So, the Delayed AGC system prevents the signal causing overflow of the ADC which would occur in this receiver within 5dB of the AGC threshold. Note that the S/N ratio in the gap between AGC threshold and ADC overflow is 22-27dB, these are not ‘weak signals’ in receiver terms.

In this receiver, there is no warning of ADC overflow, just degradation of S/N caused by distortion.

If you disable the AGC, you prevent the automatic control loop from preventing ADC overflow and resultant distortion and S/N degradation. You may also lose S Meter reading, and warning of the overflow condition.

Nevertheless, you will see claims such as:

I have not used an Elecraft K3, but I think it unlikely that it is such a poor transceiver that it needs to be operated in this way, nor that there is any real benefit except for extremely strong signals to do this.

Is it any wonder that many if not most good receivers of this type do not incorporate an AGC OFF switch, though that has not stopped hams modifying them to ‘improve’ them with such a ‘feature’.

In the next part, we jump ahead to the direct sampling SDR receiver.