Having decided to sack iiNet broadband because of recurrent under performance, I need to change VDSL2 modem as the one they supplied was locked to their SIP server (despite their assurances that there was no equipment lock-in).

I replaced it with a TP-Link Archer VR200v which seems to work ok except it is susceptible to disruption when I transmit on HF. The disruption is severe, it causes the VDSL2 modem to disconnect, and it takes around 5 minutes to reconnect.

Several different common mode chokes were tried, all of measured performance, and they all worked in that they eliminated the disconnection problem though they all resulted in small but acceptable uncorrected upstream errors. (Upstream errors are interesting since the upstream modem is 1000m distant.) 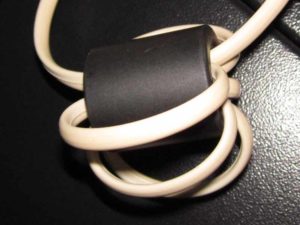 The ‘final’ design was chose as the core was just large enough to wind ordinary 4W modular cable through it. So the choke comprises a 2m length of 4W flat modular cable, one end wound 6 turns through a Fair-rite 2643102002 (FB43-1020) suppression sleeve, and RJ12 connectors crunched on in straight through pin wiring (ie reverse the plugs). I found the line jack in the modem would not accept RJ11 (4P4C) plugs readily (common with RJ45 sockets), it required an RJ12 plug. 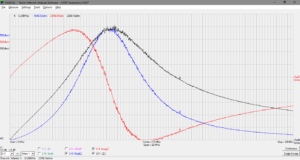 Above is a plot of measured common mode impedance of a 6t winding on the Fair-rite 2643102002 core. The number of turns was chosen to present a reasonably high choking impedance over the range 3-20MHz to suit HF ham transmitters up to the limit of VDSL2 spectrum.