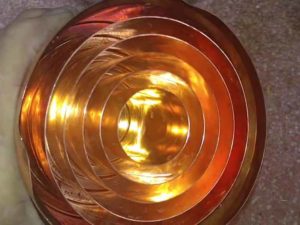 Above is a view (courtesy of N4MQ) looking into one side of a vacuum capacitor. It consists of an outer cup, and a series of 5 inner cups progressively smaller in diameter. The other side of the capacitor has a similar structure but the cups site in the middle of the spaces between cups in the first side. 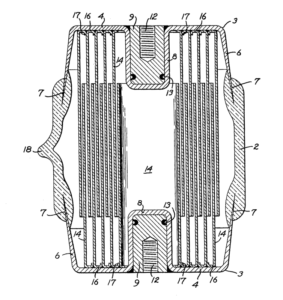 Above is a cross section diagram of a fixed vacuum capacitor from an early patent, it shows the concentric cup structures.

Importantly, these cups are usually electrically bonded circumferentially and completely to the outer cup. Because of skin effect, most current at radio frequencies flows in a very thin layer near the surface of the material, and that means that the current that flows onto the inner cup has flowed along the outside, then inside of each of the outer cups in series.

As a result of the isolation provided by well developed skin effect, what we have with two nearly fully meshed electrodes is a cascade of vacuum dielectric copper transmission lines of successively reducing diameters. 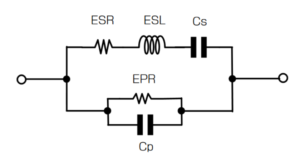 Why does behaviour depart from an ideal capacitor at higher frequencies?

Easy, the construction above is actually a folded transmission line of end to end electrical length of towards half a metre, which implies a quarter wave resonance of the order of 75MHz. There are of also harmonic resonances that are not captured by the equivalent circuit above. Smaller capacitors with shorter sections and / or fewer concentric cups would have shorter TL length and correspondingly higher SRF.

Measuring SRF is a significant challenge, the difficulty is that any test fixture affects the outcome and backing out the test fixture effects is the challenge.

(Comet 2004) sets out a method for determining the self resonant frequency (SRF) of a vacuum capacitor, and calculation of the equivalent series inductance. 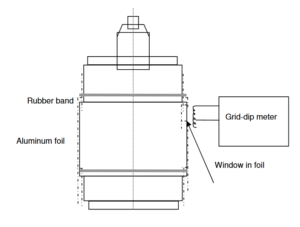 Above, their diagram of the test setup. Essentially the capacitor is wrapped in conductive foil which in simple terms appears to short the capacitor, and a GDO is used to sense the internal resonance through a small window cut in the foil.

As the frequency of operation approaches SRF, device behaviour departs from that of an ideal capacitor, and typically losses become worse, so it is desirable that SRF is as high as possible.

Since the SRF decreases with the total electrical length of the cascaded sections, why does the structure commonly connect them in series rather than parallel?