One of the insane things about some Baofeng hand held radios is that the charger cradle requires 10V DC, and malfunctions on car battery voltage.

The cigarette light adapter that came with a Baofeng GT-3TP was simply a pass through device and the charger did not work properly using the adapter plugged into a car.

The charger cradle electronics should include electronics to charge properly from a car, preferably from 10-16V. The implementation is a half-baked idea.

To solve the problem I have made an adapter cable using a small buck DC-DC converter off eBay (~$2), the converter is adjusted to 10V out. 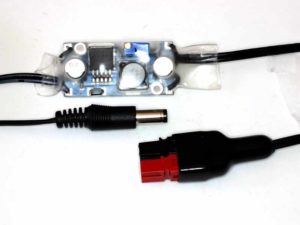 I have used an Anderson Power Pole connector to suit my power distribution, you could use a cigarette lighter plug or some other plug to suit your needs. The output connector is a 2.5mm DC plug.

It is not obvious from the pic, but the cable on the left connects to the terminals on the right and vice versa, so when the heat shrink is applied, it all acts as a strain relief, as does the boot on the Power Pole. 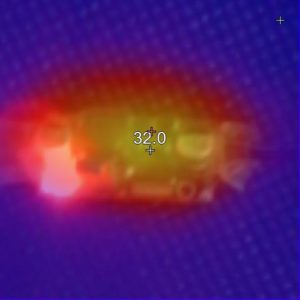 Above is a thermal pic of the converter charging a flat battery. The intense red spot at lower left is an LED. The temperature rise is less than 15°, the regulator chip is barely warmer than the capacitor on the right and inductor to the left. The operating temperature is acceptable for the heat shrink encapsulation, but it needs to operate in free air.