Both claim to have zero hysteresis. Zero hints a lie!

Hysteresis is caused in simple phase control dimmer circuits at low settings because in each half cycle the trigger capacitor starts at a different voltage depending on whether the diac fired on the previous half cycle.

A serious issue with this snap-on effect is that if power is turned off at low power setting and re-applied, the controller may not switch on. 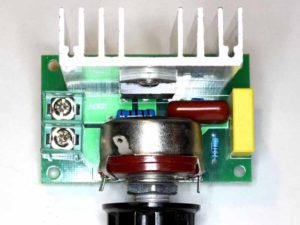 In fact the thing has severe hysteresis. If set to less than 90Vrms out, it will not turn on if the power is cycled. This severely limits its usefulness and shows the product claims to be a fraud. 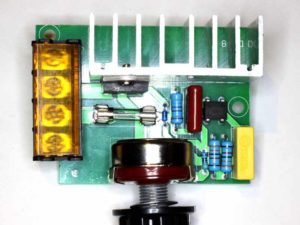 Above is type 2. Additional to type 1, it has a fuse and importantly to the left of the yellow cap there are two 33kΩ resistors, and above them a bridge rectifier.

Both boards have been cleaned, they come filthy with solder flux residue. 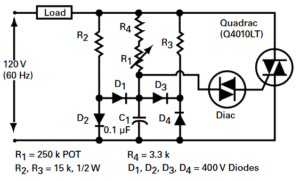 The above circuit is from an application note and shows the additional components, R2 and R3, and D1..D4.

Simple phase control circuits such as above are not perfect, the use of a diac trigger device prevents triggering below the diac threshold (around 30V typically) so there remains some residual but much smaller snap-on effect, but the circuit has very low hysteresis, and if power is cycled when set to a low power setting, it will restart properly. 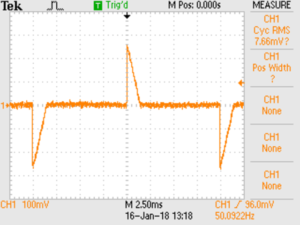 Above is a screenshot of the type 2 dimmer set to minimum stable output power, the plot is proportional to load current. (The RMS measurement is not for the tri-wave, it has been triggered by the noise.) 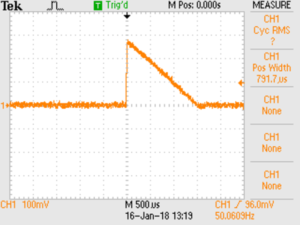 Now, when you buy a packaged dimmer module, you may not see pictures of the internals to locate the two identical value high power resistors and bridge rectifier that hint the circuit that has low hysteresis and very low snap-on effect… you certainly cannot rely upon written specification as they are used without regard to accuracy to make sales in a competitive market.