The sign of reactance – a challenge posed a problem, a set of R,|X| data taken with an analyser of a quite simple network and asked readers to solve the sign of X over the range, ie to transform R,|X| to  R,X.

It is widely held that this is a trivial matter, and lots of software / firmware implement algorithms that fail on some scenarios. Though the scenario posed was designed to be a small set that provides a challenging problem, it is not purely theoretical, the characteristics of the data occur commonly in real world problems and the challenge data is derived from measurement of a real network. 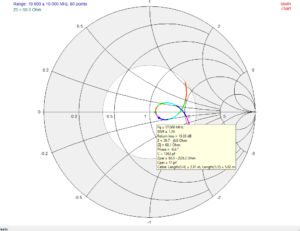 Above is a Smith chart plot of the measured data that was transformed to the R,|X| for the challenge.

A reliable method of solving a dataset with sufficient points is that the locus of complex Gamma plotted on a Smith chart has the form in a neighbourhood of an arc which ‘rotates’ clockwise with increasing frequency. This is sometimes referred to as the “Rotation Method”.

Some authors suggest that the Rotation Method cannot solve cases such as the challenge because it “contains loops”.

In fact the method as I described it does work, the failure in some attempts seems related to a failure to properly find the centre of the neighbourhood arc. One of the popular tools which is copied by some other tools goes wrong on this problem at 17MHz (the cursor in the image above) which is about where a tangent to the locus passes through the chart centre so it hints the reason for the implementation’s failure. 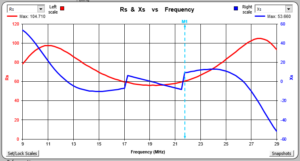 Above is ZPlots v2.4’s attempt at signing this data using its rotation implementation.

Of course to apply the method, not only has the implementation got to be complete and correct, but there must be sufficient data points with sufficiently low measurement noise to have very high confidence that the curvature has been properly detected. Too many data points increases the disruption due to measurement noise, so it is a balance.

The same applies also to the so-called “Phase method” where essentially the phase of Gamma is interpolated to detect zero crossings and infer sign of phase, though potentially it may not be as reliable to reference. 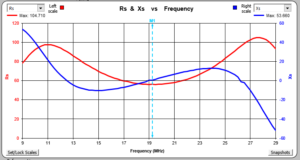 Above is ZPlots v2.4’s attempt at signing this data using its phase implementation (it is reasonably good, but with two small glitches).

The simplest solution is to directly measure the signed angle of Gamma from which signed reactance can be calculated unambiguously.

That is not to say there is no place for low end analysers which cannot detect the sign of phase of Gamma or calculate the sign of reactance. They can nevertheless calculate VSWR and Return Loss and as a self excited measurement instrument have utility if the coupler has good Directivity and the measurement resolution is good. Though they might display |X|, reliably resolving the sign of X may be non-trivial.