What it does do is create a conjugate match for a 50+j0Ω source at the input looking from transmitter port to output load on antenna port in Step 2, then attempt to show in Step 6 that when the instrument looks back from the antenna port to the matched load at the input, that measured impedance is the complex conjugate of the original output load. This is actually testing Walt Maxwell’s Conjugate Mirror proposition.

I am going to perform a very similar experiment which will test the stated “Conjugate Mirror Proposition”. The experiment is at 1900kHz to minimise the effect of adapters and load resistor imperfections and uses the ubiquitous MFJ-949E ATU. Measurements are made with a Rigexpert AA-600 which demonstrates good accuracy on a known 50Ω load. 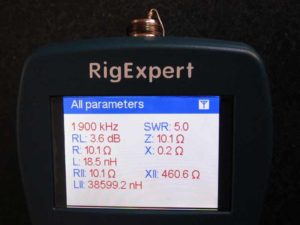 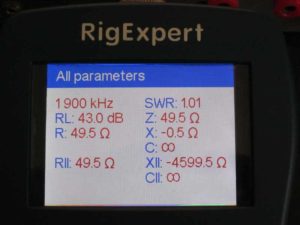 Above, ATU adjusted for near perfect match (better than the inherent accuracy of the instrument) with the 10.1+j0.2Ω output load.

3. Without changing the ATU controls, connect a 50+j0Ω load to the input port (TRANSMITTER) and measure the impedance looking into the output port using the AA-600 (COAX1).

Under the Conjugate Mirror Proposition, the measured impedance should be the complex conjugate of the original load resistor, 10.1-j0.2Ω. 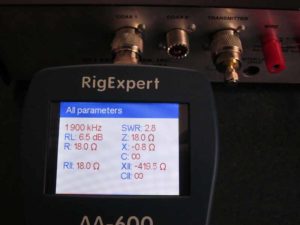 It is quite different to the value predicted by the Conjugate Mirror Proposition, 10.1-j0.2Ω.

The experiment does not give the outcome that disciples of Walt Maxwell’s Conjugate Mirror Proposition would expect, it does not support the proposition and therefore questions its validity.