Concern has been expressed by some correspondents that the digital output level is too high for some software applications that complain about excessive level. 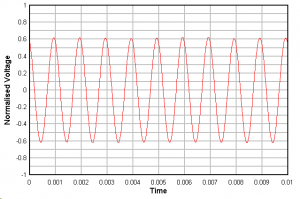 Above, an unmodulated carrier in SSB mode at 20dB above AGC threshold has peak amplitude of 0.6 relative to the maximum or clipping level of the digital encoding, this if -4.4dBfs peak. 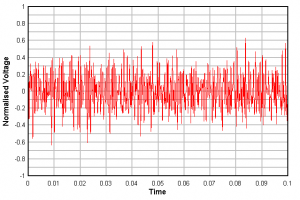 Above, white noise in SSB mode at 20dB above AGC threshold has an RMS value of 0.2 relative to the maximum or clipping level of the digital encoding, this if -14dBfs RMS.

There is no upper limit to the peak value of pure white noise, though extreme values become much less likely. In fact, in the capture of which only a quarter is shown above, the instantaneous peak was 0.63, 10dB above the RMS value, still well under the clipping limit of 1.0.

The graph above is from (Duffy 2007) and it shows that the reduction in noise power by a clipper at 14dB above the RMS value of white noise is less than 0.00001dB. The receiver digital output allows sufficient headroom for accurate capture of recovered audio.

Software that arbitrarily assumes clipping at less than 0dBfs might have compatibility issues with this receiver.