Review of 10 months of iiNet broadband Internet access detailed a fairly disappointing performance record of our first NBN based service, a 12/1Mb/s FTTN service from iiNet.

With a perception that online performance had degraded and was unsatisfactory, the results of an automated half hourly file download were consulted to verify those perceptions. 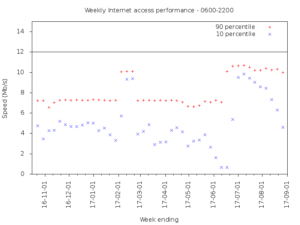 Above is a plot of the 90 percentile and 10 percentiles for each week.

The 10 percentile speed has fallen steadily in the 10 weeks since a report to iiNet and then the TIO led to fix in early June, a short term fix as it turned out. 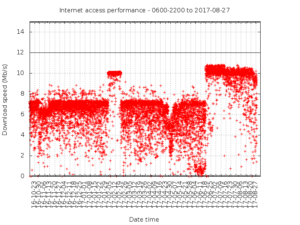 Above is a chart of the speeds of the individual tests. Again it is clear that with TIO intervention, good speed was achieved in early June, only to slide down over the following weeks.

With a perception that iiNet did not manage capacity to deliver adequate service over time, it became clear that it was time to choose another supplier, one with minimal dependence on iiNet or its parent and associated businesses, or the previous supplier Telstra whose 8Mb/s service was even worse. 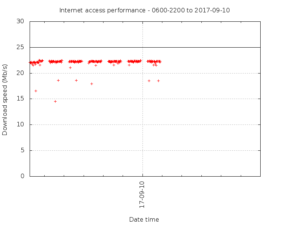 Above are the results of the individual tests for the first full week with Amaysim. The first notable difference is the higher speed, not just due to the increased nominal access speed, but a higher percentage of that speed is delivered to the customer application (a HTTP transfer in this case). The 90 percentile speed in the first full week was 20.98Mb/s, 84% of the nominal service speed (iiNet did not manage better than 78% in any week in 11 months). 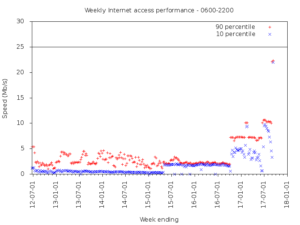 Above, successive broadband suppliers have fallen short, Telstra then iiNet, so I am cautiously hopeful about future performance with the new supplier.