An extended test comparing signals received in Florida from three nearby stations in Australia was conducted 21/12/13, a low elevation path of more than 14,000km.

The A/B comparisons were performed on statistics gathered from the W4HBK grabber, in this case measurements of the noise and each of two transmissions of 1min of steady carrier every 5min over a half hour.

The two systems were:

Observations were excluded where S/N of both signals was not greater than 10dB to reduce statistical noise, 293 paired observations remained. 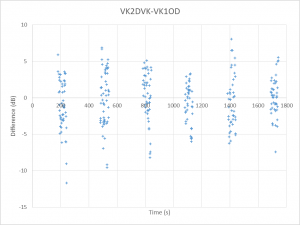 The scatter chart above shows the difference in the signals S/N of both were greater than 10dB (click on the chart for a larger view). The large variation in the data is probably mainly due to ionospheric fading, but is there an underlying difference in the performance of the two stations?

In analysing experiments of this type, it is important to determine the probability that the result could be due to chance alone, that there is no underlying effect and that repeated experiments could go either way.

The result is that there is no significant difference in the systems, the probability that the difference observed (0.3dB) was due to chance alone is 49.6%.