I ‘needed’ to explore modern controller technology for slot cars.

It is a very long time since I played with slot cars, more the technology (rewinding motors) than the racing, but as a 13 year old, I did a share of that too.

It seems that commercial tracks in AU haven’t changed technology much, the mainstream are ‘analogue’ tracks were some 10 to 18V DC is available for the track, and each track has its own controller. A long time ago, the controller was simply a rheostat of perhaps 25 to 60Ω, and when the plunger was released, the ‘output’ terminal contacted the ‘brake’ terminal so there was dynamic braking.

The modern electronic controllers have lots of smarts in them, but in ‘analogue’ mode the emulate this connection to the track using PWM to control the supply to the motor, and for braking a PWM path to control the level of braking.

It is my recollection that commercial tracks in Sydney tended to use a two pin polarised ELV power outlet on the track, and a screw terminal for the brake connection. Not all controllers supported a brake and the two terminal socket arrangement suited with the add-on terminal to support braking.

But in the intervening years, the ‘standard’ connector seems to have become an ordinary  3 pin power inlet socket (commonly used on caravans for 240V AC), and an ordinary 3 pin 240V extension lead socket on the controller.

Now it has been explained to me that this is inherently safe, as someone (eg a child) could not plug the controller into a power point.

That is true, but someone could acting stupidly or maliciously plug a live extension cord into the track in place of a controller which would be very dangerous. 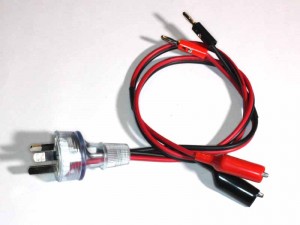 Now the controller solution begs the manufacture of little track simulators like the one above. If croc clips are attached to the car pickup, motor terminals, test track etc, and the banana plug inserted into a 12V power supply or batter source, the controller plugged to the 3 pin plug top and it all works a treat… a neat little way to test controller and car away from the track.

But if someone plugs this thing into a power point, it is extremely dangerous. I can only guess that such things have not resulted in injury or death, but it seems inevitable that a coroner will make mention of them… eventually,

(It has been pointed out to me that this is not as insane as the UK where a 240V plug top is used on the controller. Perhaps so, but it is a question of the degree of insanity rather than whether they are both unsafe directly or indirectly.)

For me, I have used XLR 3 pin connectors, these seem popular in some parts of the US. The XLR connector is available with 8mm cable entry, has a good cable restraint, a latch, and is fairly tough, and a lot more reliable than some of the connectors used for slot cars tracks (eg 3.5mm TRS and 6.5mm TRS plugs and jacks). 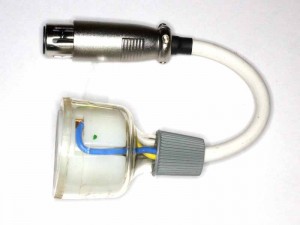 Above is the adapter necessary to use my XLR controller on commercial tracks that use the ‘standard’ inlet socket, but in-house, I use an XLR connector for my ‘track simulator’. 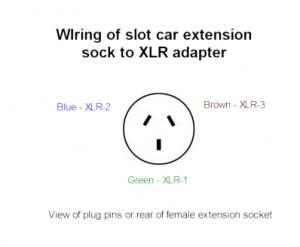 Above the pinout used for the adapter. The colours are those used in a standard extension cord if you cut the socket end off to use in an adapter (it is the cheapest way to get an extension socket). 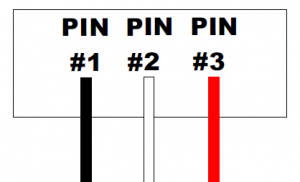 Above is the pinout used. XLR connectors usually have the pin numbers in the insulation moulding, and the colours for a ‘positive wired track’ are the ‘standard’ white (yellow) from the battery + , black to the track +ve (right hand side), and red (brake) to battery -ve / track -ve (left hand side). I have used connectors with solder buckets, ie not IDC connectors. 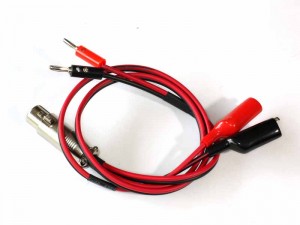 Above, a safer ‘virtual track’ for testing controller and car from a 12V power supply. This one can’t be plugged into a household power outlet.