The most common feed described is a series inductor to cancel the large capacitive reactance, but in this case that leaves a feed point resistance of 110+Ω (+ to include inductor loss), give a VSWR(50) of more than 2, hardly a ‘match’.

Is there a simple solution? 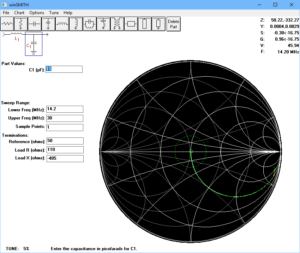 The solution is to add a little capacitance between the bottom of the radiator and the ground plane, it is the yellow element on the plot above, 11pF. This transforms the impedance to have R=50, and that can be transformed to 50Ω using the 3.73µH series inductor.

More on this shunt capacitance later…

The tapped inductor match is often proposed and most hams who do not have basic circuit analysis skills and an understanding of coupled inductors might follow W5DXP’s guidance:

In fact this match is not the no-brainer the W5DXP and others think.

The impedance at the base of the radiator in this example is 110-j485Ω. It is a challenge as it lies on the ‘wrong side’ of the R=50 circle to match it using the tapped inductor. 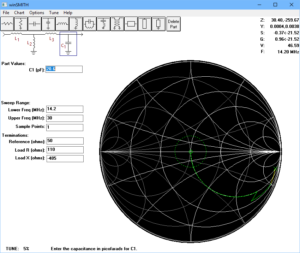 Above is a lossless match that solves the problem. The chart is done as a lossless match because practical losses are very small and of little consequence to explaining the technique… other than complicating the explanation.

The solution is to add a little capacitance between the bottom of the radiator and the ground plane, it is the yellow element on the plot above, 20.6pF. This transforms the impedance to have R<50, and that can be transformed to 50Ω using the tapped inductor as shown on the chart.

More on this shunt capacitance later.

Above is a table of the key parameters of the match as optimised using Excel’s solver. Ql has been made very large to simulate a lossless match to give a simpler Smith chart.

Both solutions above used a small shunt capacitance at the base of the radiator. In many implementations, the structure supporting the vertical radiator introduces or can introduce some small amount of capacitance in shunt with the base of the radiator. This is why some constructors have not had a problem, their imperfect support structure supplies the necessary element to making matching work.

Of course any shunt capacitance required is reduced by that supplied by the support structure.

Let us look at two simple alternatives to a shunt capacitance in the case of the series inductor match. The same technique could be applied to the tapped inductor match, but it is an unnecessarily complicated solution driven by a lack of understanding of how the system actually works.

Another method is to use a short section of transmission line to achieve the same outcome. 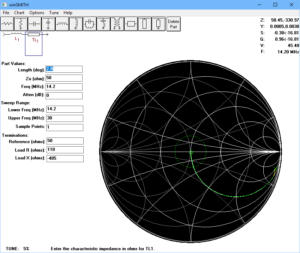 Of course any series line section required is reduced by the capacitance supplied by the support structure.

Alternatively, a shunt o/c stub could be used. 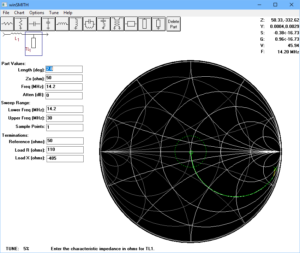 Of course any shunt section required is reduced by the capacitance supplied by the support structure.

For some constructors, it all just works somewhat simply as a result of some essential small shunt capacitance provided by the support structure for the vertical radiator.

Others have no end of problem trying to find a solution, but there are simple solutions. The solutions that are best suited to particular implementations depend on the structures involved, weatherproofing considerations etc and are left to the implementor to design.

The numerical examples above relate to a specific example scenario, individual implementations will vary a little but the techniques explained can be applied to them. Clearly accurate measurement of the base impedance of the radiator as built is a great start to tailoring the matching system to suit.

These are not the only ways of matching a 5/8λ ground planes, but they are probably the most popular.