Though a G5RV is commonly thought as a ‘no tune’ antenna, just make it to the dimensions in the book, the above shows a possible outcome.

(Duffy 2006) explains that the G5RV dipole should be three half waves on 14.15MHz, and the open wire section of the hybrid feed configuration should be an electrical half wave at the same frequency.

The outcome is that the dipole should be resonant at 14.15MHz with a feed point Z of around 90+j0Ω (depending on height etc). Likewise, the impedance looking into the electrical half wave of line should be around 90+j0Ω.

At this frequency, the loss in W6OGC’s 130′ of RG8X should be around 1.6dB… not good, but not extremely bad, the antenna system, if properly configured should work reasonably well on 20m with more than half the transmitter power radiated. Whilst the VSWR(50) at the load end of the coax might be almost 2:1, because of line losses, W6OGC should see more like 1.5:1 at the shack end but he reports VSWR>3 on all bands… something is not right!

Using the models (Duffy 2005) to explore likely losses of W6OGC’s system at 80m system efficiency is likely to be well less than 50%, and the single largest element of loss is the coax which has VSWR(50) close to 10:1 at the load end, lower at the shack end due to line loss.

The hybrid feed arrangement of the G5RV requires low loss in the coax section for good efficiency, which means low loss cable for long runs. 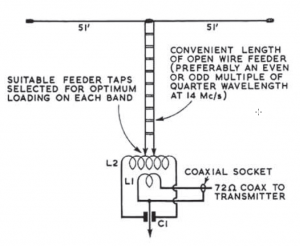 The alternative tuned feeder arrangement described at (Varney 1958) is a better solution for long feed lines, in fact for almost all feed lines! (Note that tuned feeders of some lengths may present challenging loads to the ATU, extreme impedances, extreme voltages (Duffy 2011), hence the word “almost” above.)

The modern hardware for a tuned feeder configuration is simply: