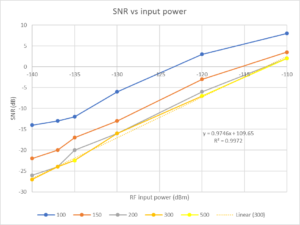 Above is the same data charted. A linear line fit to the 300Hz data is also included, it is a very good fit. The issue that Talbot raised is that the reported SNR is quite dependent on receiver bandwidth. 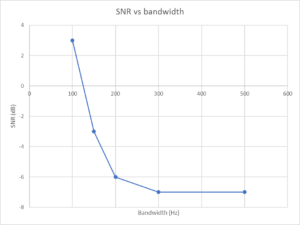 The chart above shows the sensitivity to bandwidth here at -120dBm input power.

It is apparent that the results derived from reported SNR show that bandwidths below 200Hz return incorrect SNR, and the right hand column suggests significant non-linearity at SNR=2dB, a hint of some non-linearity of the measurement system (here with only one signal).