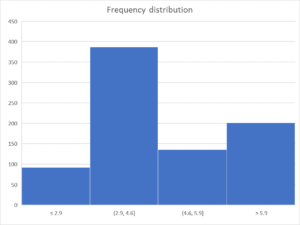 Differently to the first experiment where both transmitters fed the same antenna and we might expect that simultaneous observations at each stations might be approximately equal, in this case there are two apparently identical antennas, one close to and pointing through the other and the question is are they in fact identical in performance or is there some measurable interaction.

So, lets look at the data in a way that might expose their behaviour. 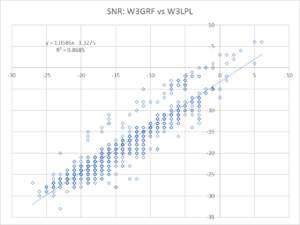 Above is a scatter chart of the 815 paired SNR reports (where an individual station simultaneously decoded both transmitters). Note that many of the dots account for scores of observations, all observations are used to calculate the trend line.

In contrast to the previous test, there is quite a spread of data but a simple least squares linear regression returns a R^2 result that indicates a moderately strong model with a Y intercept of -3.3dB (ie that there is -3.3dB difference between the systems)

We can reasonably draw the conclusion that there is a significant interaction between the otherwise identical antennas.

In fact sub-setting the data to select reports that were within +/- 5° of boresight, the difference was more like -5dB.

This raises the question of the design of an experiment, the hypothesis to be tested and then designing the experiment to collect unbiased observations that should permit a conclusion to be drawn.

One has little control of the location of observers in WSPR, their appearance is for the most part random. However, one can fairly easily filter the observations collected to excise observations outside a given azimuth range, and distance range (which might imply elevation of the propagation path). Filtering in this way ensures that the data is more relevant to the hypothesis being tested, and that should result in better correlation, less uncertainty in the result.