Lets look at the power dissipated by a typical unun used on such an antenna.

NEC models can be used to obtain a reasonable estimate of the input impedance of a ground mounted monopole.

From that, we can calculate the voltage at the base for a given power input (at the base). 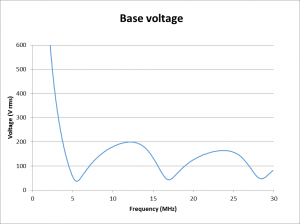 The base voltage for 100W at 3.6MHz is 230V rms (Duffy 2006). The voltage curve depends on assumptions made about the effecitve resistance of the monopole’s ground system, in this case a value of 2Ω is added to radiation resistance to obtain total R at the base.

It is common practice to install a 4:1 unun at the base of the vertical for perceived improvements in efficiency. Let us explore a practical unun at 3.5MHz. Lets suppose the unun has 10t bifilar on a FT240-43 core wired as a 4:1 unun, the high Z side connected to the feed point. 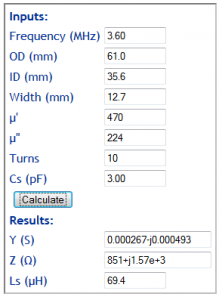 Above is a screenshot from (Duffy 2012) estimating the admittance of a 10t winding.

Operation of this balun at sustained high power with high duty cycle (eg RTTY) may result in it overheating (manifest as SWR changing as the core reaches its Curie point (130°)).