Having been pushed into CFLs due to conservationist action that removed incandescent lamps from the shelves before mature reliable product was available, I ventured into LED lighting because of the failure rate of the CFLs.

The LEDs are about the same power consumption as the CFLs they replace, the hope was that they had a longer life (you have seen the claims of 100,000 hours).

Two years after cutover, it is time to review their performance. 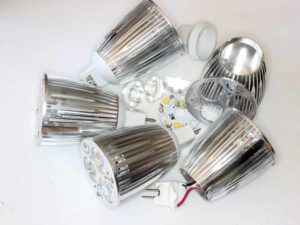 Of some 25 11W LEDs installed, most would not be used for an hour a month, but 11 are used every day for an average of around 4 hours per day.

Annual power consumption of the 11 lamps is 11*11*4*365/1000=177kWh which at current rates costs about $40. Total running costs then are $40 for electricity and about $35 for 5 replacement lamps ignoring costs of procurement, testing and installation. Repairs and maintenance has doubled the cost of operation if labour costs are ignored.

One has to question the energy efficiency of the things in the wider sense, the rubbish in the picture is mostly aluminium, one of the most carbon intensive metals to manufacture.

The embodied energy is conveniently ignored in almost all cost benefit analyses.

Are the failed lamps recyclable with expensive dismantling? Probably not.

Beyond total failure, most of the remaining lamps have changed colour as the yellow phosphor is exhausted progressively, and with just a few thousand hours of service original warm white lamps are distinctly blue alongside their new replacements.

The colour change will probably result in replacement of otherwise working lamps because their colour has become unacceptably blue, and that is likely to happen way short of 100,000 hours.

Another green hoax where the total cost of ownership and real world savings are not part of the justification!