Analysis of the current distribution in the wire shows that almost all the current flows in the core, and that the RF resistance with and without the coating is almost the same. The copper plating can be ignored as significant, in fact the copper plating will usually fall off with a few weeks of exposure to weather as rust develops under the copper.

Lets model a 40m long centre fed dipole in free space, this would be a half wave dipole on 80m if using a copper conductor but we will use the MIG wire equivalent, a steel wire (σ=2.1e6, µ=800). We will use NEC-4.2 (NEC2 cannot natively model ferromagnetic wires.) 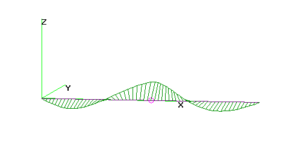 The current distribution is nothing like a half wave dipole, it is more like a three half waves dipole due to the magnetic effect of the wire.

Ferromagnetic wire changes the tuning of the antenna, radically.

If the objective is a stealth antenna, this is doubly stealthy, not only can no one see it, no one can hear it!