A correspondent recently wrote regarding the theory expounded in (Findling et al 2012), and their measurements and performance predictions of the AlexLoop Walkham, Portable Magnetic Loop Antenna by PY1AHD.

The authors give a formula for lossless Q (to mean no loss other than by radiation) without explanation or justification.

The formula is wrong, possibly a result of slavish acceptance of Hart’s two factor incorrectly applied (see Duffy 2015, and Antennas and Q). This error feeds into an optimistic estimate of antenna efficiency.

(Findling et al 2012) presents a table of measured half power bandwidth for the Alexloop.

Taking the 40m case, lets calculate to Q for a lossless loop, Qrad in Findling’s terms. 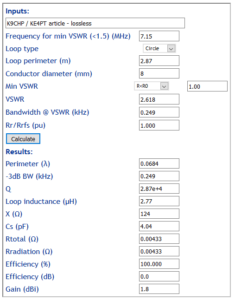 Note that Q for the lossless loop is about half that of Findling.

Findling made measurements of the Alexloop, presumably in the presence of real ground but he gives no details of height or ground type. Though he does not mention loss in ground or feed system components in his formula, his measurements do capture those effects. 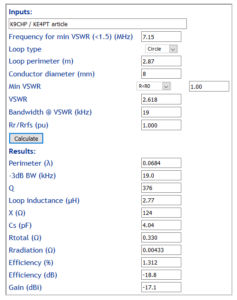 Above is a calculation of loop efficiency based on Findling’s reported measurements. Not surprisingly, it is 3dB poorer than Findling calculates base on his incorrect lossless Q.

Findling mentions NEC modelling in the text. Had he critically reviewed an NEC model of his lossless loop, the error in the Q formula would have been apparent.

It is an interesting article, and the measurements are worthwhile even if not fully reported, but overall the prediction of efficiency in percent twice that based on a correct lossless Q formula taints the whole article.

The loop itself on 40m has lowish efficiency for its size, not surprising considering use of a braided loop conductor.

It comes to light that some small loops, including one brand measured in the reference article, may use a more complex main loop connection (discussed at Single turn coaxial loop resonator analysis), and the analysis above and in the referenced article assume that the simple direct connection was used.