The roller inductor in a Palstar AT2K will be taken as an example to illustrate the technique. This tuner is popular and has a very good reputation amongst hams, though (Duffy 2012 was less enthusiastic). 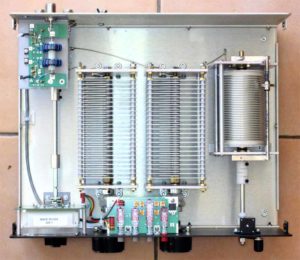 Above a pic of the internals of the AT2K. The unused roller induction section is shorted.

Assuming that loss resistance is proportional to the length of wire, the relative loss in the shorted turns can be calculated. (This assumption may not be so valid for a roller inductor where contact resistance component of total resistance is probably independent of tap position.)

This hinges on the accuracy of the inductance calculation.

Above is Knight’s error prediction.

It is unsafe to apply this T model where the inductance of one or other coil parts is less than about 0.3% of the full coil L12.

The model used does not include the effect of distributed capacitance, but its validity at low HF for practical inductors remains good. The study here is at 1.8MHz (MF) to attempt to explain the observation that these things have quite low Q at that frequency, and that rolls into poor efficiency.

Solving the model for a coil similar to that in the Palstar AT2K yields the following graph. 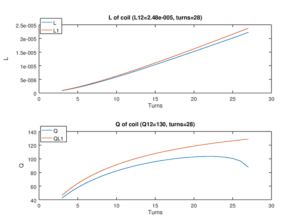 Above, plots of apparent L of the shorted coil and L of the used coil stand along (ie the unused part is just not there), and Q for the same components.

It can be seen that the shorted section reduces apparent L a little, more so relatively at high tapping points (where the shorted section becomes short), and Q is markedly poorer than the standalone L1. Note that Q for short coils is quite poor due to that geometry, short large diameter coils have poorer Q than ‘squarer’ configurations for the same L.

So, in use the ATU, at the tap point approaches max L (as used on the lowest band), the shorted section degrades Q. That is not to suggest it can be ‘unshorted’, that has it own problems, but it is an explanation of why Q doesn’t increase all the way to max L (as it does for the component L1).

These inductors tend to come up with Q way short of what would be expected for a plain air solenoid. If this coils was wound with 2mm plain copper, the RF resistance of a straight conductor of 5.45m would be around 0.3Ω, a little more with proximity effect when wound in a coil, perhaps 0.5Ω (and Q=400+), yet 25µH with a Q of 130 at 1.8MHz suggests R12 is 2.2Ω. The roller contacts will be one contribution, the type of plating could be a contribution (silver look plating does not necessarily reduce RF resistance (Fowler 1970), effects of distributed capacitance and then when tapped back from 100%, the shorted turns increase loss.

This tuner’s capacity to match low R loads with high capacitive reactance is limited, so we will take a modest load of 10-j100Ω. Match will require and input C of about 155pF and inductor of about 23µH. Consulting the chart above, that will occur with the tap at about 22t and Q will be about 103. 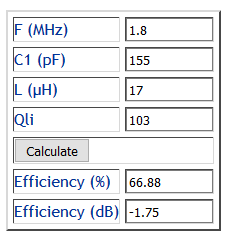 Above is an estimate of the efficiency to match a quite modest load of 10-j100Ω. The model assumes that the inductor loss dominates total loss, and that is a valid assumption for this type of tuner at this frequency.

Here is an ATU that is widely regarded as a premium product that converts a third of the RF input power to heat with a load of 10-j100Ω on 1.8MHz.

Little wonder that these things can be damaged by quite modest power on the lower bands.

ARRL published a review of the AT2K. 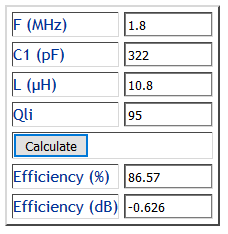 Above is an estimate of the efficiency to match a quite modest load of 25Ω. The model assumes that the inductor loss dominates total loss, and that is a valid assumption for this type of tuner at this frequency, and this reconciles with the ARRL review.